An explosive pro debut saw Saludar face Roland Gamolo in a 4 round debut fight. Froilan became only the 2nd person to stop Gamolo shy of the full distance, stopping him in the 3rd. Saludar's rise in boxing continued with 11 fights against fighters such as Jecker Buhawe, Ryan Illustrisimo and Remuel Obidos. He had a mixed start to his career but mostly successful so far.

Ryan rey Ponteras was up next for Saludar on February 14th, 2010. Saludar continued with his winning streak by beating Ponteras. Showing his class against Ponteras, Saludar was the 6th person to go the distance with this opponent. Saludar continued his success in the next 5 fights taking his record to 9 wins, 0 losses and 1 draws.

On October 26th, 2013 Saludar fought and beat Tawanrung Eausampan (2-2-0) to continue his unbeaten streak. Showing his class against Eausampan, Saludar was the 3rd person to go the distance with this opponent. Saludar's wins continued and went from 19 wins to 20 after he then defeated Rogen Flores.

Taking another knock in his career, Mcwilliams Arroyo was next in line for Saludar with Arroyo coming out victorious. Saludar career was at 20-1-1 following the fight. Mcwilliams Arroyo became the first person to stop and also the first to defeat Saludar. The win came via TKO in the 2nd round of a 12 round bout.

In Saludar's most recent fight, Juan Purisima was handed a beating by Saludar on October 4th, 2014 to ensure his win record increased further again to 21 wins. Saludar's win against Purisima was only the 3rd time Purisima had been stopped. The fight finished in the 2nd round of a 10 round fight via KO. 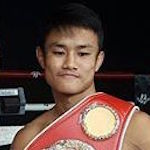