Ready to showcase his talent in the pro ranks, Ellis defeated Josh Beeman over 4 rounds in his debut to secure his first win (UD) against a durable Beeman. Ellis built on his successful start to his career by fighting 3 times in 2013 and 4 times in 2014 which included fights against Orlando Falcon, Josh Beeman and Bryan Abraham to name just a few.

Ellis then went on to fight and beat Bryan Abraham on March 17th, 2014 maintaining his unbeaten record. The 4 round fight ended in the 2nd round via TKO crowning Ellis as only the 9th to stop Abraham. Ellis then went on to win a further 4 fights taking his record to 8 wins, 0 losses and 0 draws.

On July 11th, 2014 Ellis fought and beat Regino Canales (6-5-0) to continue his unbeaten streak. The win against Canales happened in the 3rd round of a 6 round fight via TKO.

David Martinez was beaten next on July 19th, 2014 meaning Ellis could maintain his unbeaten streak. Showing his class against Martinez, Ellis was the 4th person to go the distance with this opponent. Taking his record to 12 wins, 0 losses and 0 draws, Ellis then went on to win a further 2 fights.

Next was Joseph De los santos on November 14th, 2014 where Ellis took the win continuing his unbeaten streak. Becoming the 4th fighter to stop De los santos, Ellis beat De los santos via TKO in the 5th round of a 6 round fight.

Ensuring he remained unbeaten, Rashidi Ellis defeated Victor Gonzalez on March 14th, 2015 in his most recent fight. Ending via TKO, Ellis became the 9th fighter to stop Gonzalez. The defeat came in the 4th round of a 8 round fight. 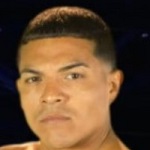